Have you ever tried to put toothpaste back in the tube? Maybe shaving cream back into the can? How about words back into your mouth? The first one is hard; the second one, much harder; the third... impossible.

I was reading a story today about a father of a young girl with #CerebralPalsy. Dad would regularly bring his daughter to a particular indoor play establishment in Guelph, Ontario. Though the establishment had a policy of socks only, an exception has always been made for this little girl because she needed to wear her shoes and braces in order to climb on the play structures. I don't want to mention names (against my instinct as a father of a special needs child), because I am trying to make a general point, not point out a single incident. Having said that, if you are on Facebook and live in or near Guelph, Ontario; you probably know to which incident I am referring. As it turned out, at this particular visit, the owner of the establishment was present, and enforced her rules much more stringently than any of her employees have in the past. The father and daughter were shown the door, and forced to drive to a neighbouring town to complete the play date. As a result of the angry posts of this girl's parents, the establishment in question was so overrun with negative feedback that they decided to shut down their Facebook page. Unfortunately for this company, all that they accomplished with that action is to remove themselves from the conversation.

So, what went wrong? Well, as with most similar incidents, this is the result of a comedy of errors.
1) Employees should have brought the exception to the attention of management.

I understand that this would have been a tough thing to expect of an employee. "Uhm, boss, yesterday I broke the rules, and I thought you should know about it." But maybe, the first visit would have been the place to cut this off at the pass. If the owner had a reputation as being an ethical entrepreneur, her employees might have been willing to ask the father for his contact information and say "I'm sorry, but right now I have to enforce the rules. I will discuss this situation with my boss and have her call you to discuss what options are possible in the future." While the father and daughter would have still been upset, they would have had the comfort of knowing that it was not impossible, just not possible now.

2) The owner and the father should have looked for alternatives that would address all concerns.


Now I don't know what would have been a possible alternative, I know very little about Cerebral Palsy, but a dialog with two experts (the owner as an expert in play structures, and the father as an expert in Cerebral Palsy), must have been able to come up with alternatives. Would it be safe for the little girl to where dad's socks over top of her shoes and braces? If not dad's socks, perhaps some other rubberized covering.

3) The organization should have stayed in the conversation.


Here is the attempt at damage control that the owner put out on Facebook just before the page went down: 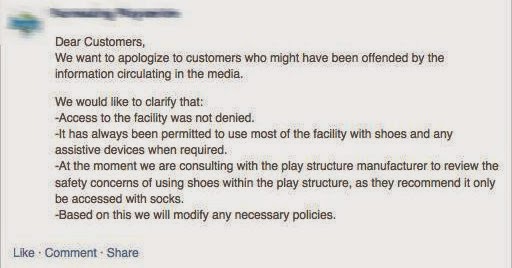 The parents have since argued (adequately in my opinion) the first two points.

It was bad enough that the owner didn't stay in the conversation directly with the parents. Had she done that, and conveyed a sense of empathy and a desire to find a solution, the parents would probably not have launched their campaign to boycott the establishment. The entire thing would have been resolved without threatening the bottom line.

In fact, the parents would probably have bragged about the care that the establishment had given them and the owner may have been sitting on a nice Ethical Credit. Instead, buy "pleading the fifth" and shutting down the Facebook page, the owner is now burdened with Ethical Debt, from under which she may never escape.

In The Art of the Start 2.0, @Guy Kawasaki points out how lawyers should be used. Rather than asking a layer if you should do something, Kawasaki says that you should say "This is what I want to do. Now, keep me out of jail." In my opinion, if you need a lawyer's advice on how to handle an irate customer, you've let it go too far.