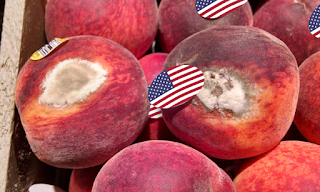 One would have to be living pretty deeply under a rock to not know that Canada is being bullied by president #45 of the United States of America. President Trump has unilaterally declared economic war on Canada, and entered into bilateral discussions with Mexico in an attempt to subvert the North American Free Trade Agreement (NAFTA). That is, of course, his prerogative. It would seem that Free Trade, as a concept, is completely foreign to Mr. Trump, because he only views a "negotiation" to be a success if he "wins" and the other guy "loses". Free Trade, on the other hand is all about mutual benefit, not winners and losers. As such, I don't expect that NAFTA will have a life until the orange man is out of the white house. While the government of Canada continues to press for mutual respect in negotiations with Washington, we are restricting our tariff activities to "tit-for-tat" adjustments. This is the civilized approach, and our government is wise to do so. However, when dealing with a bullying ape guerilla tactics are in order. It is time for all Canadians to stand on guard for Canada and hit the United States of America where it will hurt most, the pocket book.

I sent a letter today to Prime Minister Trudeau requesting that the product labelling laws in Canada be adjusted to require the provenance of products be displayed, by percentage from each country, on all packaging. For example, if a box of cereal is imported from Mexico but uses wheat from the USA, I may want to consider another brand that uses wheat from Canada. Or in another case, just because a pair of shoes is assembled in Canada doesn't mean that they don't use uppers and soles from the USA. Perhaps the government could certify products that have more than a certain percentage of Canadian content (say 80% or higher).

Such changes however, if chosen, would take a long time to implement. We Canadians must act now. So I am asking that all Canadians contact the grocery chains at the corporate level, and advise them that we will NOT be buying produce from the USA, and request that they identify other sources of produce for their stores.
Almost all grocery stores in Canada are owned by one of three companies: either Empire Company Limited, Loblaw Companies Limited, or Metro. Writing to Loblaw Companies Limited one reaches 27 grocery and pharmacy chains. Writing to the Empire Company Limited, will reach 13 grocery chains. Writing to Metro will reach 5 grocery chains in Ontario and Quebec. To the best of my knowledge, there is nothing that is grown in the United States that cannot be either sourced from another country, or replaced with a comparable product from Canada. If the large grocery chains are made to understand that produce from the USA will just rot on their shelves, they will make other purchasing decisions, or they will lose sales to competitors who do.

The time to act is now. Stand up to this bully, and show him what Canadian grit and determination looks like. Call or write today. Don't know what to say? I've drafted some thoughts at the bottom of this page to get you started.

I am a loyal customer of [name of chain].

I am very concerned about the situation involving Canada's trade with the United States. As such, I would like to advise you that, until an equitable NAFTA has been renegotiated that is fair to all trading partners, I will not be buying any produce that originates in the USA. I ask that you make sure that you source produce from other countries so that I continue to have the selection to which I am accustomed. If I cannot avoid American produce at your stores, I may have to avoid your stores to find stores that are willing to stand up for Canada.

Thank you in advance.