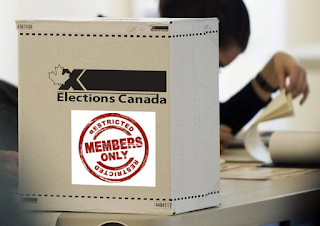 Recently, the Vancouver Sun reported on a study from the Samara Centre for Democracy which discovered that a vast majority of candidates across political parties face no competition in the nomination process.

While the article is attempting to expose a flaw in the candidate nomination process, I believe it exposes a greater flaw in our overall electoral process: the political parties themselves.

One would be justified to be disturbed at the findings in this study, but one should not be alarmed. The party-based political model  is designed to keep the power in the hands of the leaders of the political parties. This is done in an attempt to root-out the free-thinkers that led to the SNC Lavalin scandal. The leadership of political parties don't want anyone challenging their authority, so they limit who's invited to the dance.

I've discussed before how our political system puts the cart before the horse. This report drives that point home. We need a system of government that puts the people first. We don't need some fat-cat in Ottawa telling us what should be important to us. We should be telling our parliamentarians what is important and they should debate the best ways to address our concerns. The article correctly states:

“Part of the power of parties for voters is that they simplify the choices [...] If they can’t have some role in simplifying the menu of choices, what are they for?”

There was a time, when we needed that simplification. We had no means of knowing who believed what, and it was easier to align our votes based on the stated beliefs of a political party; birds of a feather and all that. Today, technology has removed that need. With a few keystrokes anyone can find out not only what's on the "menu of choices", but what ingredients make up each choice. Now you could argue that such information can be used to better align ones choice of political party, but that doesn't solve the problem that the local candidate is merely an employee of the political party with which s/he is associated. When elected, your value to her/him disappears for four years, and s/he votes exactly the way s/he is instructed by the party leader, regardless of your values/priorities.

So what do we do? The people who can make the changes needed like the system the way it is, because it keeps them in power. Vote. Most importantly, we must vote. Unless someone is willing to start a party with the explicit goal of abolishing party politics, vote independent. Of course, this requires you to put in the effort needed to ensure that the independent is actually someone who shares your values and priorities, but you should be doing that anyways. With enough independent members of parliament, the power of the government can be controlled, if not swept away.

Get involved. Speak your mind. Demand accountability. Avoid party-based mud-slinging. Don't believe everything you hear, and only half of what you see. We have had too many years of leaving the important decisions to people who place their own interests above the interests of the people they are supposed to serve.

It's time for a revolution.
#AbolishPartyPolitics